What is the Minor Arcana and how does it impact us?

The Minor Arcana - also known as Minor Trumps, Trumps Minor, or the Lesser Arcana - makes up the bulk of each Tarot deck; there are fifty-six minor cards in all, and they closely resemble the cards in a regular fifty-two card deck used for card games such as poker or gin rummy. Like the popular card deck of today, the Minor Arcana has high cards including King, Queen, Jack, and Ace and also ten pip cards which fall under the royals. Pip cards are the non-royal cards with numerical value. Also like traditional decks, the Minor Arcana is divided into four suits: Wands, Cups, Swords, and Disks. Different regions developed their own takes on each suit. For example, it was in France that the traditional spdes, hearts, diamonds and clubs suits originated, whereas swords, cups, coins and staves are attributed to Latin. Leaves, hearts, bells, and acorns are a German tradition and shields, roses, bells, and acorns are Swiss. 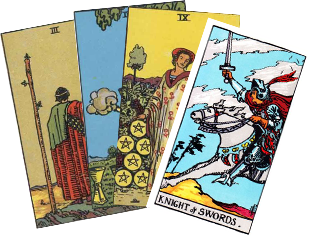 Each suit is also associated with an element: Swords (Leaves, Spades, Spears, or Pens) represent Fire or Air; Cups (Chalices, or Hearts) represent Water; Coins (Disks, Rocks, Pentacles, Diamonds, or German Bells) represent Earth; and Wands (Sceptres, Staves, Rods, Clubs, Batons, or German Acorns) represent Air or Fire. Accounts of how the suits crossover and correspond between decks differ. The suit is an important tool for interpreting the symbolism of each card in the context of a particular deck. According to Encylopedia Britannica, Wands connect to ideas about career and business; Cups are associated with romance; Swords relate to mind and internal conflict; and Coins connect to material rather than spiritual concerns.

Since each suit corresponds to an element, one can also use they symbolism of each element to interpret a card. Together, the four elements are the basis for all experience and through their combinatory powers the known world is manifest. Each element has certain associations that help reveal the meaning of the cards; it is also helpful to note your own associations with that element. For example, do you fear water or love it? Are you drawn to the earth, to hiking and camping, or do you prefer air-borne activities such as flying or bungee jumping? Here are a few notes about what each element symbolizes.

Air is associated with freedom and with dreamers as well as transcendence and/or uprootedness. Fire relates to emotionality, recklessness, desire, and also the soul. Water links to the unconcious but also compassion, healing and soothing, kindness, vulnerable love, and sensuality. Earth connects to creation, fertility, flesh, instinct, and also material concerns. Each element has both positive and negative associations. Fire represents zeal but also destruction. Air is trusting and optimistic but also can be dishonest and touchy. Water is understanding yet at times indifferent, lazy, and unstable, whereas earth is both sober, punctual, consistent but also superficial and scornful.

Another way to interpret the Minor Arcana cards is to use numerology. Numerology is a practice in which numbers are turned into symbols with divinatory value. This practice comes from Greece where Pythagoras stated that the world - reality - could be expressed completely by numbers. In using numerology to interpret the card, sifting through your own immediate associations with numbers can be helpful. For example, the four suits correspond to the four earthly elements of Greek thought. Also, there are ten pip cards under each suit in the Minor Arcana; this number corresponds to the number of human fingers or toes. Odd numbers, which are off balance, are associated with a masculine forcefullness and even numbers with stability and femininity. Some also suggest that colors offer a key into the cards meaning.