The Major Arcana, also known as the Trumps Major or the Greater Arcana, comprise twenty-two cards of the seventy-eight card Tarot deck. These twenty-two cards in particular are laden with symbolic imagery that comes from all manners of ancient mystical traditions; not just Judaism and Christianity but also Ancient Egyptian spirtuality, Gnosticism, Neoplatonism, Celtic mythology, Suffism, alchemy, and even Buddhism. In sequence, the Greater Arcana can represent the path to spiritual realization, much like the ten ox-herding illustrations of Zen Buddhism. On this path there are a number of obstacles, but each one opens the individual to broader experiences of life, meaning, and truth.

To explore the 22 Major Arcana in detail

Organisation of the 22 Major Arcana

Each card illustrates various competing forces such as the earth’s elements, real and mythical creatures, or human emotions and vicissitudes. Despite dating back all the way to 1440 in Italy, the Trumps, built on archetypal experience, are still very relevant to humans everywhere. The Major Arcana came before the Minor, and the game was at first only available to nobles. This is one reason for the many images of crowns, robes, and thrones throughout the deck. Although the first use of the Major Arcana was as an entertaining card game, they later became a medium for divination. Their use as a divinatory tool did not come until much later. 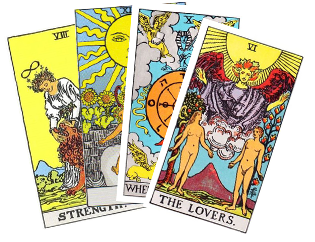 Because many of the cards reveal striking and even frightening imagery, there were some who opposed their use, finding them distasteful and even offensive. The Trump cards do not appeal to a restrained morality as they deal with such topics as mortality, pain, and suffering. However, not all of the cards deal with such dire matters; the cards also present commentaries on the more pleasant aspects of life such as (re)birth, fertility, courage, and inner-strength. However, because of the particularly unsettling nature of The Devil card to some in the late 1400’s, one Italian priest gave a sermon stating that The Devil took the souls of those who lost at the card game.

In the 18th century, interest in the Major Arcana cards resurged, particularly in France, where they were studied by occultists as tools for investigating morality and spirituality. Additionally, a man named Antoine Court de Gébelin took up tarot as a form of divination and also as a key to Ancient Egyptian thought. As tarot became popular again, the Major Arcana cards were reinvented by different cultures to suit differing ideas about morality. The cards also evolved in the hands of secret societies who used them more regularly as a form of cartomancy. Later, a man named Eliphas Lévi drew links between the Hebrew mystical tradition of Kabbalah and the Tarot. The Rider Waite deck, created in the early 1900’s, also integrates Christian mysticism.